After wanting to visit LA for years, I’m happy to say I finally did this past September. I was originally heading out there to attend Story Expo, but the event was unfortunately canceled this year, so instead, I got to spend a few days in LA for a mini-vacation. My mom accompanied me, and we had an awesome time together.

We flew out of JFK on a late Thursday afternoon and landed at LAX in the evening thanks to the three-hour time difference. Speaking of, since our internal clocks were still on New York time, we woke up at 4:30 the next morning, which is obscenely early, but it was cool being the first two people in the dining hall eating breakfast at 6 AM. Incidentally, we stayed at the Luxe City Center Hotel in downtown LA, a great hotel, though we learned it will be coming down within the next two years to make way for new residential buildings, mainly condos, which are currently being constructed. The hotel concierge, Nick, was particularly great and helped my mom and I create an itinerary for an otherwise unplanned three-day vacation. When we first got there, we headed to the hotel restaurant, and I ate a delicious French burger while taking in the LA city life, a surprisingly far cry from the loud and busy city of New York, though still exciting all the same.

On Friday, we set out on a tour of LA, and the best part about it was that my mom and I were the only two passengers on the tour bus, so we essentially had our own private tour. Our tour guide, Carlos, was extremely knowledgeable of the history of California and shared fun facts about many different buildings and landmarks. Our first stop was Griffith Observatory, where we took pictures of the famous Hollywood sign. Afterward, we headed to Hollywood Boulevard and checked out the stars on the Hollywood Walk of Fame consisting of notable names in TV, film, music, radio and theater. I will say that Hollywood Boulevard reminded me a lot of Times Square in terms of how crowded it is thanks to all its tourist attractions. That said, it was a really fun place to explore. We saw the studio where Jimmy Kimmel Live is taped, and we looked inside the shopping center area of the Dolby Theatre. We also checked out the Grauman’s Chinese Theatre, outside of which are nearly 200 handprints, footprints and autographs in the concrete from celebrities spanning the decades. That spot, in particular, was where I myself felt the most like a tourist—eagerly taking in the sights while snapping as many pictures as I could. 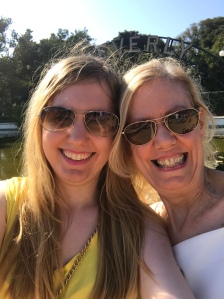 Next, we headed to Beverly Hills, where everything screams extravagance, from the lavish homes to the ritzy road of Rodeo Drive packed with high-end stores. Not only that, but I kid you not, never had I seen so many fancy cars than I did on the streets of Beverly Hills—rife with luxury brands like Rolls-Royce, Mercedes-Benz and Lamborghini. When the tour was over, our tour guide dropped us off at The Grove, a fun shopping and dining center bustling with excitement. We browsed the stores and eventually went to a Barnes and Noble for tea, which we drank outside while relaxing on the store’s balcony.

After that, we headed to Gallery 1988 on Melrose Avenue, where the opening night of a BoJack Horseman fan art exhibit was being held. This was easily one of the highlights of the trip for me. When we first arrived, I was amazed to see the long line of fans waiting to head inside the gallery. As we got closer, I happened to notice a guy with glasses standing outside the venue, chatting with some people, and he happened to look a lot like the creator of the series himself, Raphael Bob-Waksberg. Turns out, it was him. I learned that not because I summoned the courage to go up to him, but because my mom was the one to walk straight up to him and ask flat-out, “Are you the creator of the show?” to which he simply responded, “Yes, I am.”

Thankfully, in that moment, I was able to get over my silly nerves and step in after my mom told him how much I love the show. She stepped aside, and all the jitters associated with meeting a person I admire melted away as I shook Raphael’s hand and engaged in a brief conversation with him. He asked me what brought me to LA, and I explained that I was supposed to go to a writers’ convention, but it had gotten canceled so I was simply visiting now. I then told him that I was reading one of the books he recommended on Twitter. He asked me which one, and I said, What It Means When a Man Falls from the Sky. (It’s a book of short stories written by Lesley Nneka Arimah.) He was happy to hear it and asked how I liked it, and I said I was really enjoying it so far and that the first story alone really got me with the ending that packed a punch. He agreed about the ending, and he thanked me and said he hoped I’d have a nice time in the gallery. I thanked him and told him it was a pleasure to meet him, and I shook his hand one more time before my mom and I finally went inside. I was honestly so thrilled to meet him, let alone chat one-on-one with him. I don’t know if I ever would’ve gotten the nerve to approach him on my own, so I have my mom to thank for that.

The gallery itself was wall-to-wall with people admiring incredible artwork from fellow fans of the show. The detailed pieces showcased many unique styles, drawing inspiration from eclectic names like Picasso, Lisa Frank and The Ren & Stimpy Show. I ended up buying a copy of one of the pieces, a pink poster with the catchphrase “Suck a Dick Dumb Shits” written in beautiful calligraphy. I’ve since framed it and hung it in my room. I also bought three pins, one of BoJack, one of Princess Carolyn and one of Vincent Adultman happily exclaiming, “I did a business!”

On Saturday, we went on another tour, this time of Warner Brothers Studio in Burbank. We had an awesome tour guide, Eden, who led our group to different locations where various TV shows, movies and commercials are filmed. I particularly loved getting to walk around the lot where all the exterior scenes for the fictional town of Gilmore Girls’ Stars Hollow were filmed. Other stops on the tour included a DC Universe exhibit and a Batmobile collection museum. We also looked through an indoor facility where thousands of props are available for rent, and we got to check out the set of a currently-airing FOX show called Lethal Weapon and learn about some filming tricks along the way. At the end of the tour was Stage 48, an interactive soundstage with lots of interesting TV and film paraphernalia to view. My mom and I got to hold an actual Oscar trophy, and we sat on the couch of a makeshift Central Perk set from Friends. Additionally, one small but noteworthy part of the museum I loved was an animation display filled with drawings and sketches of various Looney Tunes characters, as well as other Warner Brothers-produced cartoons like Animaniacs, Pinky and the Brain and Tiny Toon Adventures. Also displayed were original cel drawings of classic Hanna-Barbera cartoons, including The Flinstones, The Jetsons, and Scooby-Doo, Where Are You!

On Sunday, our last full day in California, my mom and I ventured to Venice Beach, where we walked along the boardwalk filled with street performers and vendors. From there, we went to Abbot Kinney, a mile-long stretch of stores and places to eat, where we shopped for a while. After that, we headed to the Urth Caffé in Santa Monica for lunch, and then it was off to the Santa Monica Pier, where you could feel the laidback vibe of California living as people were out and about, enjoying the gorgeous afternoon. We ended our day by heading up to a rooftop bar at Hotel Shangri-La, recommended by our concierge. It was the perfect place to take in the view and cap off our amazing, memorable trip.

I’m so happy I finally got to visit LA, and I’m grateful my mom came with me, as she’s the best travel companion. My goal is that the next time I get an opportunity to go to California, it’ll be for something writing-related, whether a job or fellowship. Until then, I look forward to traveling more whenever I can.